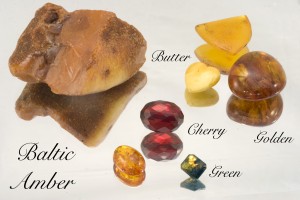 Baltic amber, also referred to as “true” amber, is 50-million year old fossilized pine resin. It is found mostly in the Baltic, from whence it derives its name, but there are other deposits in all regions where pine trees grew. It enjoys a long history of being prized, often considered to contain magical properties derived from the sun. Due to its origins as a resin, it is frequently included by air bubbles, dirt, and occasionally insects or plants. Insect inclusions have enjoyed a type of fame since the release of the movie Jurassic Park, in which scientists cloned dinosaurs from DNA found in included amber. Unfortunately, although amber inclusions have been very important to scientific research into the dinosaur’s era (including some recent finds regarding feathered dinosaurs), dinosaur DNA would have degraded too much in 50 million years to allow cloning with modern technology.

Amber is sometimes misrepresented by Kauri Gum, a much more recent resin from South America. It is also misrepresented by plastic. If you rub the test piece vigorously on fabric, true Amber will be polished and remain hard. Plastic will give off a noticeable synthetic petrol smell and Kauri gum will emit the scent of pine. Both plastic and Kauri gum are soluble in Acetone whereas Amber is not.

Jewellery containing amber must be treated with a high level of care. Since it is an organic stone, it is very sensitive to acids, alcohol solutions, and chemical cleaners. It is very soft and scratches easily. As an Organic, it can be melted at a low temperature, as in the oven in your home and can be ignited if exposed to a direct flame, such as an open flame or a struck match. Despite these sensitivities, amber has long been prized as a decorative stone: archaeologists have found artifacts dating back to 5000 B.C. Amber was significant in many ancient civilizations located in Europe, such as the Romans, Assyrians, Phoenicians and the Etruscans.

As you can see in the picture above, we have in stock fresh, raw amber from the beaches of Gdansk, in Poland, available in our store. Of course we also have finished pieces available as stones and mounted in jewellery.