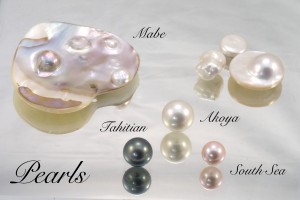 Pearl! All colours, shapes and sizes. Valued as a treasure by people back in time before the written word and up to today. How the very first pearl was discovered is pure conjecture but I assume it may have happened when someone found a mollusk open on the beach with a glistening little orb peaking out from between the shell segments in the bright sunlight. It’s amazing how some Calcium and Aragonite can be layered by such a primitive animal into something so beautiful. Imagine the delight of the first person to view this little treasure. And imagine the rush to see if there was more of them to be found. All too quickly the first people would have traced the source into the waters and so the Pearling industry may have begun. Just as an aside, this may also explain how people began to eat these strange little blobs. I can’t imagine any other reason to gather “rocks”, smash them open and see if there’s anything juicy inside.

Pearls develop inside mollusks, bivalve shelled creatures, as a protection from irritants like a shard of shell (but not the proverbial grain of sand). The vast majority of Pearls come from a very few species of Oysters and Clams. The same material is used by the animal to propagate the shell as is used to create the Pearl. The gnarly outer layer on some shells is a concretion from other animals attaching themselves to the “rock” and foreign material. It is not considered valuable except as fertilizer.

Oysters create the finest Pearls. They secrete layer upon layer of translucent, iridescent Nacre over and over in concentric rings. The layer on layer acts prismatically: breaking apart the colours of light as well as reflecting the surface colour back to the viewer. This accounts for the “depth” of colours, or Luster” in a fine Pearl, the first factor in establishing value.

As time progresses and the “protection” increases in size, the Pearl itself becomes an irritant. The mindless animal continues to create a bigger and bigger globule anyhow, much to our delight. This accounts for another of the pricing factors for Pearls; Size.

The surface can be as rough and irregular as a Rice Krispie, as smooth and round as a marble, or anything in between. The closer it is to a perfect sphere, without any surface blemishes, the rarer and more valuable it is. This is the third of the valuation criteria.

Number four is the body colour. It can range from a translucent white to a metallic Black with every shade of Grey in between. There are also ranges into the Pink, Green, Yellow, Lavender and Orange. Some of these choices are not as desirable as other to the general population but one man’s ho-hum is another man’s WOW.

The surface texture and reflectivity is the final requirement. The less flaws or blemishes on a Pearl, the greater the value ascribed to it. If there are only one or two blemishes and they are close together and small, it may be that they can be drilled out for the post used to create a pair of earrings or for the bail for a pendent. In this case, the dealer can get a better cost and should be able to pass it on to his clients. If the second blemish is directly across from the first, it may never be seen if the piece is destined to be a pendent. The first would get drilled out and the second would be at the bottom, invisible for all practical purposes. And the general smoothness is very important as well. If two Pearls are compared, one to another, and the first has a noticeably “glassier” surface than the other, the first will be more expensive. The great majority of clients prefer smoother, more reflective pieces.

Freshwater or Saltwater / natural or cultured?

Saltwater Pearls obviously come from oceans and seas. Freshwater Pearls are found in lakes, rivers and streams. They are produced by different animals, oysters and clams respectively, but they yield similar products. They were both originally sought out in their natural habitats until someone decided to make it easier and more economical by gathering them up and putting them into the same place. They created the first farm in the water.

Great idea, no fault, no foul. Still all natural and everything is OK.

And then along came the tourists in their boats, the big city pollution outflows, the Crown of thorns starfish and everything else that’s destroying the watery habitat. All together they confirmed the farming concept as valid simply because the natural areas were all being destroyed and disappearing.

But then someone thought, “what if I put the irritant in myself instead of waiting for something to find its way in naturally?”. Now we have “Cultured” Pearls, in the farms. Finally someone thought “what if I take an ugly Pearl and grind it perfectly round and then use that for the irritant?”. Still the same cultured pearl in a farm? It’s all Pearl, through and through, better than the original ….. “can I charge the same as if it were natural if it can’t be distinguished from the original?”

So now we have the ability to create big, beautiful Pearls, solid Pearl through to the core, at a fraction of the investment or time required by nature and very, very few people can tell the difference. In fact, because of this process, big pearls that might be very expensive are now routinely X-rayed to ensure that there are no perfectly concentric layers inside. If there are, it would indicate tampering during the growth cycle. However, many smaller pearls are not examined as the cost to view each and every pearl is prohibitive. And surface polishing, dying or bleaching have all become more prevalent too. Big beautiful Pearls at bargain prices!! If that sounds familiar, now you know how it’s being done. And many people don’t care. They just want to possess the appearance of great expense without paying the price.

Source locations, formerly a major factor in price, becomes a somewhat hazy factor because of the above information. If you start with freshwater nuclei from China, grind it to shape in Malaysia, then ship it to Tahiti where they finish growing it in a sea farm and finally send it to Hong Kong for final surface polishing, drilling, knotting and sale, what is it? How much is it worth? These are the problems of the Pearl dealer today.

All treatments are required, by law, to be divulged at the time of sale. The bottom line is the degree of trust that you, the consumer, have for the dealer you are trading with.

If you really want to see a fine Pearl, come in and we can talk. We can show you Pearls in all ranges and colours; from pennies to many dollars per piece. Know what you are buying or find someone who will be truthful to you. By the way, Pearls are always in style and they are an alternate birthstone for the month of June.